HOW CAN WE HELP YOU?

Get a quote & see how much you could save.

Selling tech door to door Best Buy and Amazon plan to find business that is percolating just under the surface by doing what brush salesmen used to do: Go house to house.

With thousands of gadgets and add-ons available for communication and tasks inside the home, consumers may not even know what they need or what’s available.

But suppose you could get a high tech person to come to your house, and review your needs?

It’s different than showing up to a store with an item in mind. In that case, the salespeople sell that item. They might have an upsell, too. But it’s probably not what the consumer needs.

The house-to-house program will let consumers know what they could have and how it would help them. Plus, salespeople can schedule installation.

Unlike the traveling salespeople of yore, these consultants aren’t paid on commission and don’t press for an immediate sale. They just tell you what you could have.

The two-year-old Amazon program is currently offered in six cities.

The limit on catch-up contributions for employees age 50 and over remains the same at $6,000.

The deduction phase out limit was also increased. This means that if your Modified Adjusted Gross Income exceeds certain ranges, the amount you can deduct is reduced (or phased out).

There was no change in contribution limits for IRA and Roth IRA plans. The maximum you can contribute to a Roth IRA is $5,500 per year (or $6,500 if you are age 50 or older).

There was a change to deduction phaseouts, though. If your Modified Adjusted Gross Income exceeds certain ranges, the amount you can deduct is reduced (or phased out).

For married couples filing jointly, the range is $189,000 to $199,000. The phase-out ranges for married filing separately have not changed.

Frozen pipes not only mean the inconvenient lack of water, they also can burst, causing an expensive repair problem.

Homeowners are often understandably frantic to get water pipes running again. But thawing the pipes improperly can lead to more problems.

Never use a device with a flame to thaw out pipes.

A little heat on the right pipe could get that water flowing. But a flame on the pipe is a very bad idea.

According to fire experts, flames under the house, even when directed at pipes, are a common cause of fire.

The open flame from a heater, especially a propane salamander, can instantly ignite insulation or flooring materials under a house.

Worse, pipes can heat up dramatically from flaming devices, with heat traveling along the piping systems inside walls. This heat can ignite wall materials, which can smolder for hours before being discovered, or bursting into flame. Alternatively, excessive heat on metal piping can cause water to boil, causing the pipe to burst, according to the Red Cross.
If you know where the pipes are frozen, first open the faucets and then apply heat with a hair dryer or electric heating pad.

Prepare ahead of very cold temperatures.

If you know your pipes are prone to freezing, take some simple steps ahead of cold weather.

First, give yourself a supply of water. Partially fill a bathtub with water when very cold temperatures are predicted. This can provide water for pets, cleaning, or bathing. It will also give you some breathing room so you can take your time unfreezing pipes.

Next, keep the faucets open to a drip. This will help prevent pipes from freezing. Although this can put a strain on water pump systems, it is usually better than broken pipe disasters.
Close garage doors, especially if there are pipes along the garage walls.

Open your cabinet doors in the kitchen and bathroom to allow warm room air to circulate.

Don’t turn down the house temperature during very cold nights.

Never set the thermostat to less than 55 degrees when the weather will be below zero.

One of the best ways to prevent frozen pipes is with heat tape or heat cable. These low-heat products usually can be plugged in at the beginning of the season and left until Spring. This is especially good for pipes that are run along the outside of walls.

Be sure to unhook outdoor hoses and close valves supplying outdoor faucets.

If the problem with frozen pipes is persistent every winter season, consider moving exposed piping. Although this is a major project, it should prevent future problems.
Insulation in attics, basements and crawl spaces will help prevent frozen pipes, too.

What Damage Is Covered?

In the event of a natural disaster or storm, you should know what the limits of coverage are for your home. If your home insurance does not cover certain aspects of damage that you are vulnerable to, you should purchase additional insurance so you are not left unprotected. For example, you are not covered if you experience a flood either from a storm or because of mechanical failure in the home. However, wind, hail, and lightning are usually covered by a homeowners’ insurance policy. Ask your agent for specifics when choosing your insurance, and ask them to help you determine what other types of insurance you may need to cover yourself completely based on the area you live in, and the risks associated with your location.

Determining the amount of coverage you need to protect you from storm damage is based on the value of your home and other factors such as contents and additional structures. Gather all of your information and receipts and get an accurate total of the value of your home and let your agent help you get the right coverage amount. For more information about storm coverage and coverage amounts, call or stop by Cypress, TX, InsureUS.

Our professional insurance agents can get you the insurance you need so you can be fully protected from storms and other covered events. Don’t leave your financial well-being to chance. Get the right coverage you need today.

When the weather outside is frightful, selling your house is not so delightful.

That’s what folks say, anyway. But is it always true?

Real estate agents say not necessarily. As with most things in life, it all depends.

Weather is, in fact, a factor and when frightful weather means a lot of snow, showings could slow down. But, on the other hand, a warm winter can be a boon for sellers as home buyers get an early start on the season.

The strength of the local real estate market also comes into play. A strong market can be good even in December. There are always buyers who, for many personal and business reasons, must find a home during the holidays. Those kinds of buyers are motivated.

Here are some considerations for selling during the fall/winter holidays:

– You don’t have to keep your house dark during the season of lights. Decorate, but do so modestly. A Christmas tree can make a home look warm during the cold winter season. Display just a few gifts under the tree. Too many begin to resemble clutter and buyers need to be able to look past decorations.

– Avoid flashing lights inside and out. Stick to simple, classic decorations.

– Limit decorations to the main living area. Although some families go all out decorating every room, as a seller you want to keep decorations of all kinds to a minimum.

– Most agents say that sellers should avoid religious displays, but in some areas of the country this would be acceptable, especially if done modestly. The key is not to overwhelm the house. Make it easy for the buyer to see the rooms.

– Make the most of the season by enhancing curb appeal. Although the trees might not have leaves, the garden won’t have weeds either. Some decorations are seen as welcoming, no matter what the season: A wreath on the door or outdoor lights that emphasize the walkway or special parts of the property.

– If your property looks especially glorious in Spring and Summer, consider leaving out a photo album.

– Play muted classical music to add to the overall ambience, according to HGTV.

– Light the fire. Winter is also a great time to show off your fireplace. So spread the warmth!

It’s common these days to complain during the holidays about how commercialized the season has become. In fact, complaining about the holidays has become as much of a tradition as the holidays themselves.

We are hoping this year you’ll enjoy the fruits of all your good work for the year. You are appreciated by your family, your employers and your nation.

So this year, maybe we should complain less, delight in the giving more, and then open up our hearts and be thankful for the season — maybe a little commercial but also a lot of fun. Here’s hoping you’ll be joyous! 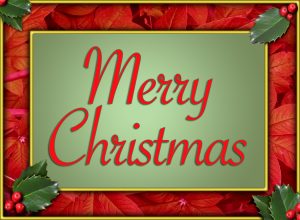